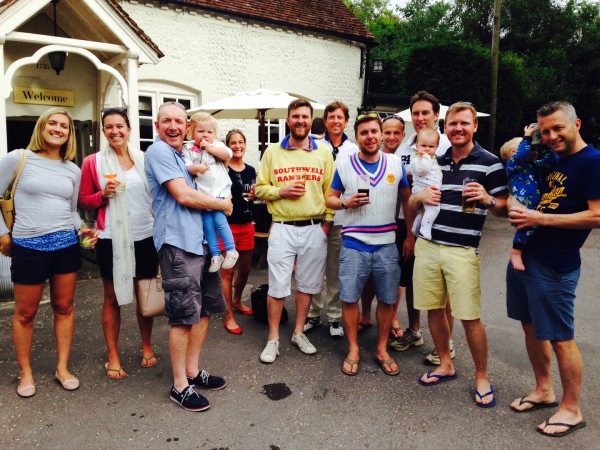 “The greatest glory in living lies not in never falling, but in rising every time we fall.” Confucius

I come here to praise Burpham, not to bury the Ramblers. Defeat to a better team is no disgrace. The frustration is that we never put the host's superior skill set under more pressure. It may not have changed the result but it would surely have narrowed the margin. A 9 wicket hammering inside 23 overs has few silver linings, but at least we batted first. A full 40 overs of chasing leather and vaulting over boundary fences would have been exhausting.

A good toss to win then, and in the same way that clear skies and calm seas precede the tempest in tales of nautical mishap, so the Ramblers set sail serenely with no sign of the destruction that was to follow. Andrew Cadge and Russ Jones opened as openers should; respecting good balls and latching onto anything loose. A well struck pick-up behind square hinted at a change of gear, but then like so many before him Russ tried to play exactly the same shot next ball to a completely different delivery and was trapped in front. How in front is up for debate, but Jim Lane's willingness to keep the game moving as umpire is most certainly not.

Jamie Jaggard's arrival brought fresh impetus, the stylish southpaw driving and pulling with purpose from the outset. The young first change spinner bore the brunt as the Ramblers approached 50.

Starved of strike, his partner being a fine counter as well as a fine batsman, Cadgie tried to force things and was expertly snaffled in the slips. Tim Stansbury's stay was briefer but more eventful and whether his loud cry of "no" as he was bowled neck and crop was a belts and braces call to turn down a single or a cry of despair we may never know.  But at 62 for 3 no need for distress flares just yet, and Jamie found a staunch ally in Chris Williamson, who showed admirable patience in dropping anchor to allow Jamie the freedom to keep the board moving, albeit more slowly than before. Both batsmen seemed content to see off Burpham’s impressive left arm spinner, but having so nearly done so Chris blinked first and holed out tamely to mid off to spark a collapse. Jamie, dreaming big, played his first ugly shot in a beautifully crafted 62 and was castled.

The sight of Chris Lloyd dispatching his first ball in SRCC colours back past the bowler for four brought some much needed levity, but it did not last long and when Ben Leach, last year's hero with the bat, became the second man brilliantly caught in the slips the Ramblers had slipped from 108 for 3 to 132 for 6. Tom Handley and Gus Williamson found a few boundaries to take the scoreboard past 150, before the skipper tried to be cute and paid the price. With balls running out Tom selflessly perished in pursuit of quick runs, leaving the final responsibility to the Jims. Nothing wrong with Jim Owen's plan to hit their spinner into Hampshire, nothing right about the execution. Ramblers all out for 162 in the 39th over.

If it felt 50 runs light at tea, it felt 150 light 22.4 overs later, but just like the first innings the initial exchanges were promising. Jim Lane, left high and dry with the bat, channelled his ire into a fiery new ball burst, while at the other end Jamie beat the bat with frustrating regularity. A flashing chance through the hands of gully (I won't name him; he's still brooding) proved costly, however, as their right handed opener went on to play a gem of an innings, studded with shot making of the highest order. The dismissal of his opening partner, smartly taken at a well-positioned leg slip was as good as it got.

The incoming batsmen rode his luck initially and survived several close shaves against the wiles of Williamson Jnr and Owen, but his habit of following up his play and misses with enormous sixes proved hard to contain. And there was little respite at the other end as his partner continued on his merry way to cap off a brilliant all-round performance that included the key wicket of Jamie, two sharp slip catches and an unbeaten half century.

The teams took drinks with Burpham needing 50 more from 120 balls. They only needed 16 of them, victory coming in a barrage of boundaries as the pavilion clock struck a WAG friendly 6pm. The winning runs came off Tom’s only over, but the ultimate indignity belonged to the skipper an over before when a second filthy full toss in succession was smeared over the fence and straight into a large cow pat. A fitting finish to an over of steaming crap.

A mighty fall, but we rise again at Chiddingfold with the words of Confucius ringing in our ears, and the faint whiff of bovine poo emanating from our kit bag.