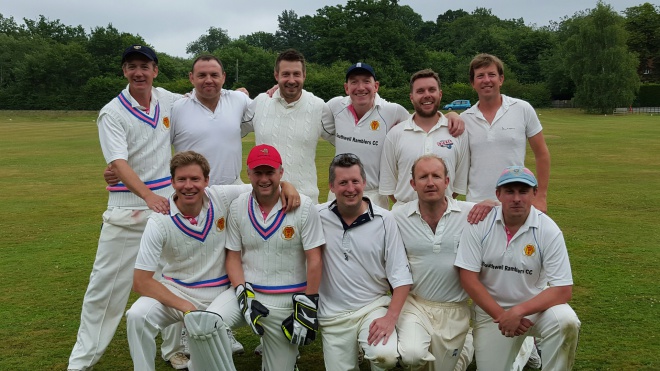 When you reach the age of 16 you are allowed to do the following in the UK:

To that list we can now also add, beat the Ramblers single-handedly in a jury-rigged game of T30 village cricket. The warning signs were there from ball one, his thunderbolt of a loosener leapt off a length and thudded into Macca’s gloves. Helmets were hastily donned but the extra protection was most needed just below the knee roll as the youngster zeroed in on Macca’s pads to deadly effect. Jim Lane once again showing that when it comes to friendly fire he’s more than a match for the US Marine Corps.

Ben Leach, with a nod to Viv Richards, strode out in just a cap and brought a much needed sense of calm to proceedings; at the other end Nick Williamson was showing pedigree through the off-side and mongrel between the wickets in a frenetic but highly entertaining debut. Whether playing tip and run with a torn hamstring in carpet slippers is courageous or plain stupid depends on where you stand on these things, but Ben was wise enough to eliminate the risk of a run-out with some crisply punched boundaries. But just when it looked like the partnership was set for something sizeable Leach Jnr guided one directly to slip.

Enter our first ever International, and when you’ve worn the famous red jersey of the British & Irish Lions with distinction, don’t expect to be fazed by the pursuit of Ramblers’ Yellow, and so Rob Henderson took guard and nonchalantly deposited his first ball into Cricket Green Cottage, another boundary followed soon after but in a not entirely unpredictable turn of events the 32 times capped Irish centre was out stumped shortly after.

When Nick was trapped in front at the other end for 31, the Ramblers were listing badly and in need of a hero.  Dom, more Evelyn than Steve, came and went in a hurry, before Jim Owen and Dan Leach finally showed a bit of game sense and targeted the toy town boundary. With the partnership gathering momentum and Chidd forced to rotate their meagre resources a target of 150 looked more than achievable. Dan, like the rest of our middle order moths, was drawn to the flames of slow, loopy spin and fell to earth, but with Jim finding the middle of the bat and Chris Lloyd supporting him sensibly from the other end the board began to tick over again at a reasonable rate. A superb piece of fielding from Dan Leach [subbing for the oppo] curtailed Jim’s cameo, and our hopes of 150. But bat on ball from Tim Powell and some selective hitting [a little too selective at times] from Lloydy took us to 138.

Early wickets needed, and early wickets got. Macca produced a peach of an inswinger, 11 Ramblers roared as one and eventually the umpire raised his finger. With Jim Lane finding pace and bounce off a full length, Chiddingfold’s skipper was finding life tough at the other end. No such dramas for the 16 year old who made full use of local knowledge and the tiny leg side boundary to pounce on anything loose. A smartly taken caught and bowled gave Leggy the wicket he deserved and when the young tyro swiped across the line and straight to Dom Waugh an over later the Ramblers were on a roll and scenting blood.

Wickets then tumbled as the host’s callow middle order succumbed to the wile and guile of our spinners and the safe hands of our outfielders. Jimmy O stuck first, hitting the top of off before combining with Tiny to bag a quick brace. Ben, having handed over keeping duties to his brother, struck in his very first over, and when Hendo’s heavy ball off-breaks cleaned up their number 6, the victory target looked a long way off. The returning 16 year old had other ideas and looked determined to make the most of his second chance, but with 40 needed he once again walked across his stumps and flicked the skipper straight to Dom Waugh. Deja Vu turned to despair, though, as the catch went down and with it the Ramblers best hope of victory. Undaunted, the visitors strained every sinew. Drizzle and tension hung heavy in the air, but the young’un farmed the strike, found the fence with aplomb, and finished it off in style.

A novel format, an exciting finish, but ultimately another defeat for a typically spirited SRCC side. Some say the scorebook never lies, and the bare facts are that Chiddingfold scored more runs and lost fewer wickets, but to judge this game by figures alone is to know the cost of everything and the value of nothing.  Ask yourself this question, who were the real winners: the 11 brave and unswerving souls who dared greatly and fell just short or the 7 men* of Chiddingfold, who profited from a bailout that would make a Greek banker blush? And if you don’t know the answer, you’ll never understand the question.

Yellow: Jim Owen [runs, wickets and a characteristically whole-heated effort in the field]

*That at least 3 of them weren’t old enough to buy a pet, pilot a glider or drive a moped is a fact best glossed over. 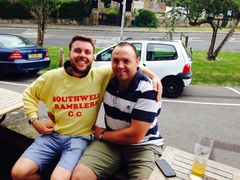 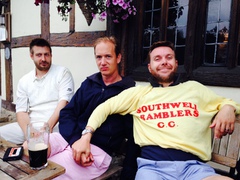 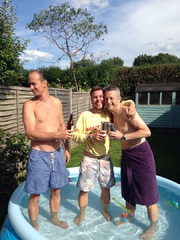