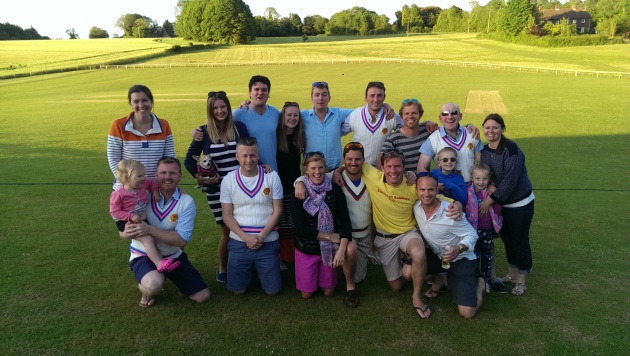 Sir Dave Brailsford's obsession with marginal gains was so deep rooted that in the immediate aftermath of Team GB's Beijing triumph he ordered the incineration of all team clothing. Their space age kit, and its time shaving qualities, had been the talk of the velodrome and he wanted to make damn sure it couldn't be copied by his competitors. Four 4 years later in London rivals complained that Hoy and Co's wheels were rounder than everyone else's. With the psychological advantage already established, another gold rush followed.

The value of such marginal gains is harder to gauge in a sport like cricket with all its glorious vagaries. Ultimately, it's the shirt you take off rather than the one you put on that really matters. But there's no denying the spring in our step as we took to the field in our splendid new kit, and six hours later the Ramblers were joyously removing shirts and jumpers infused with the sweaty nectar of victory. Hard won and dramatically achieved it will live long in the memories of all involved and hopefully set the tone for a summer to savour.

Asked to bowl first, the Ramblers worked off the rust surprisingly quickly, Nick Marsh striking with the last ball of his first over via the safe hands of Callum Oliver in the gully. As the young righty joined the older lefty the scoreboard began to tick over and seam made way for spin. Callum dropped straight into his work, and there was another opening over breakthrough this time from the skipper. The young righty continued to play his shots but soon found himself at the same end as his partner; Ben Leach collected the throw and calmly rolled the ball back to the bowler's end. Bails off, batsman out, Ramblers on top.

Another right/left partnership took hold for the hosts, and as more balls began to find the middle of the bat our early season fielding was put to test. Ryan Pope repeatedly put his body on the line, but sadly it was rarely anywhere near the ball. Happily, his bowling was much more accurate and like last year he produced a peach to knock over their dangerous left hander. A gem of a spell from Marcus Jansa kept the pressure on at both ends and the tall right hander succumbed to a wild slog and a very fine catch from Russ Jones, who after a second or two of silent hesitation and resolute inactivity made good ground from behind the stumps to give Popey his second wicket. Keeping Madehurst to under 180 was now the target, and some deadeye death bowling from Marshy and Macca ensured we hit the bullseye. Madehurst, 179 for 8 from their 40.

Two overs into our reply and things were looking bleak. Leacho, the 2014 SRCC Batsmen of the Year went from hero to zero in 3 balls, Russ would follow an over later and at 2 for 2 our tea time optimism looked a little foolish. Slowly, and then increasingly surely the Ramblers rebuilt; Ali Turner providing the bricks and Tim Stansbury the mortar. The partnership passed 50 with a flurry of crisply timed Turner boundaries, and had swelled to 70 before Tim lost patience for the first time and holed out to the spinner. When Ali fell for 37 in his next over, and Jansa and Pope soon after, all momentum was with Madehurst.

Tommy Handley went down fighting and got the Ramblers into 3 figures, but neither he nor Nick Marsh had an answer to the young quick who belatedly realised full and straight was the way forward. 70 needed, 2 wickets to go, things were looking straight forward for Madehurst as well.

If Macca, surveying the carnage from the other end, ever panicked it never showed, and in Callum he at last found a partner of permanence. While Callum counter attacked with long levers and sound judgement, Macca rattled along under the radar, but above the rate, without breaking sweat. When Callum was trapped in front the Ramblers were still 17 short and Madehurst moved in for the kill.

It never came. Macca took charge; the skipper at the other end rotated the strike, ran hard, and left our hero to hit the winning runs with 10 balls to spare. Defeat is an orphan, victory has many fathers, and all 11 Ramblers played their part in this thrilling win, but Macca was the Daddy.